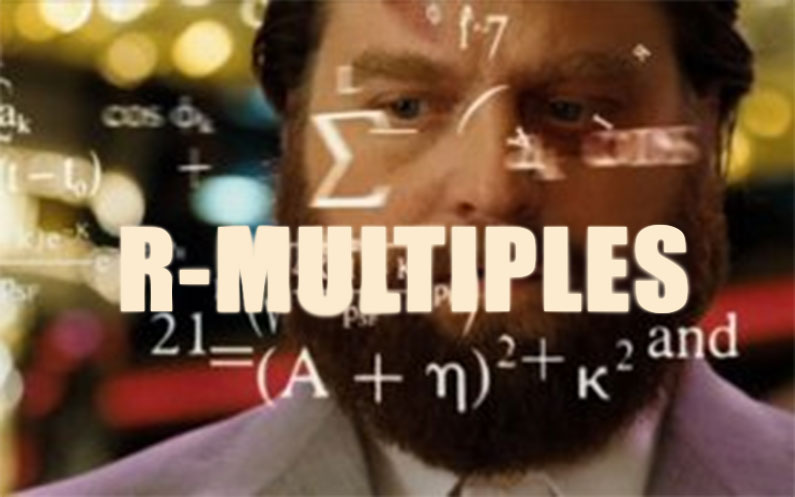 R (aka R-value) and R-multiples is a concept developed by Dr. Van K. Tharp., the well-known professional trading coach who wrote several trading books such as “Trade Your Way to Financial Freedom” or “The Definitive Guide to Position Sizing”.

All good. But what’s the point of using R and R-multiples? Glad you asked.

Why R and R-multiples are useful?

And as you can see, reward-to-risk thinking is integrated in the R-multiple concept. When you get -1R trade, you basically cut your losses perfectly and only lost the amount R you defined prior to entering the trade. And when you get a 3R trade for instance, you know that you made 3 times the amount you risked.

So by thinking in R-multiples, you are in the mindset of cutting your losses short and letting your winners run.

2- Protecting the downside & knowing how much to bet
Since the R-value is the initial risk taken in a trade as defined by your initial stop loss, you not only have no choice but to know exactly where you’re getting out before you get in, but you also have to calculate your position sizing based on your R and stop loss.

3- Less money pressure, more process-focus
The vast majority of us have a very strong emotional attachment with money since we associate it with survival, safety, status and power, or basically most of our human needs.
So no wonder trading is difficult since money is on the line all the time, the money we’re risking, or the money we’re not making.

Thinking in R & R-multiple places some kind of a buffer between us and the thought of money:
Instead of risking $1,000, we’re risking 1R.
Instead of losing $500, we’re only down -0.5R.
Instead of thinking you’re already up $500 and not wanting to lose it, you’re only up 0.5R, much less than your initial risk.
Etc.

5- Expectancy and Expectations
With R-multiples, it is really easy to calculate your expectancy, meaning how much you can expect to make (or lose), on average, per trade.

Calculating the expectancy with a series of R-multiples is really simple. It’s the average.

6- Position Sizing
Position sizing is probably the least talked topic, but one of the most important one as it will determine your max drawdown and risk of ruin. And you guessed it, using R & R-multiples makes it easier to know what kind of position sizing would be appropriate for your needs.

You first need a good sample size of your past trades (let’s say 100 trades) translated into a series of R-multiples. We basically assume that the trade sample is representative enough of your strategy.

You then run randomized shuffling of this R-multiples series, which is called a Monte Carlo simulation. You can randomly shuffle those trades using Excel for instance. There are many youtube tutorials on how to randomize a list of elements, like this one.

Based on those, you can then determine what would be a comfortable R-value for you, in order to make it very unlikely for you to lose more than what you’re able to stomach.

Let’s say that the max drawdown out of the 1,000 simulation was -31R, and that you are unwilling to be a drawdown of more than 30%. Well, you now know that you should be risking less than 1% per trade, meaning your R-value per trade should be less than 1%.

R & R-multiples can allow you to optimize your position sizing to your needs, instead of, for instance, using an arbitrary position sizing that could potentially have too high of a chance to lead you to ruin.

What are the limitations?

1- Approximations
Like any concept in trading, R & R-multiples are not foolproof, nor are they the Holy Grail. They are a useful tool that can give you an approximation of what you can expect and a mental edge. There can be a big discrepancy between the results you get and what you can expect, especially given the fact that it is possible that we get filled at a much higher (or lower) price than the price we based our position sizing on.

Also when using percentages, one has to be careful not to expect an optimum compounding effect, since it is possible to be in a situation where we don’t have enough cash left.

2- Several Positions
That brings me to second limitation of R and R-multiples which is that it assumes that one takes one trade at a time, and it overlooks correlations.