My First Half of 2019 Trading Review 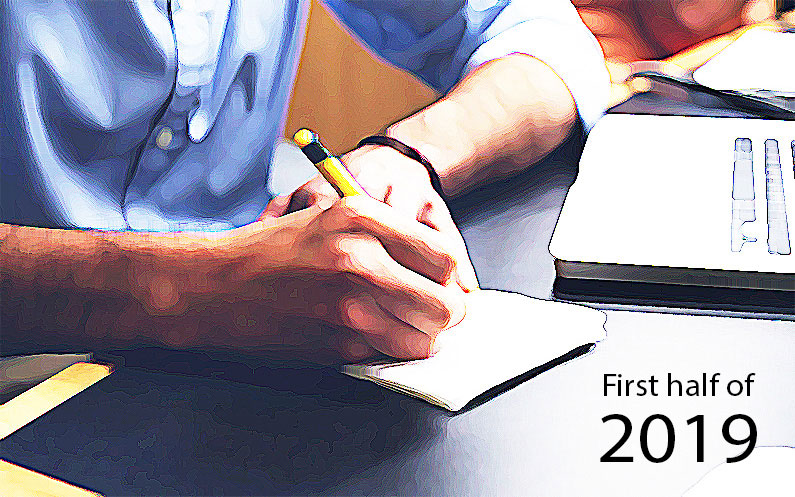 It’s this period of the year. The period when I reflect about my first half of the year, both on a personal level, and of course on a trading level. This is the period when I dare facing the harsh reality of what happened in my life, how I performed trading-wise. It’s time to take responsibility.

What’s new in my life

Let’s start about the biggest thing that happened to me this month, and the reason why I took a break from social media:

Yup, my very first child, a baby girl. Amazing, difficult, rewarding, exhausting… Tough to put words on how I felt and am still feeling. Incredible experience.

And we moved to a new condo. I had no idea I was going to have FX Lifestyle as neighbor 😆

On another topic, I signed up for the US Investing Championship (USIC), the famous competition a couple of market wizards won in the past (David Ryan, Marty Schwartz, Mark Minervini, …). Unfortunately I signed up late in April, so my results only reflect my performance for the last 3 months… Anyways, there’s still 5 months to go till-year end. I’ll let my strat (and the market) make all the decisions for me.

And last but not least, many people asked for an update about my course.
I had no idea it was going to take this much time… It changed a bit my perspective on people creating online courses. It’s a LOT of work.
And no way I will be releasing it before I’m satisfied. On top of teaching my strategy, it will contain lots of stuff I’ve never seen in any other trading courses, such as:
– lots of example of unprofitable trades in order to prepare you mentally to the reality of using my strategy
– the mechanisms, some stats and even the philosophy behind my strategy so that you will understand exactly why it works, which is in my opinion key in order to be able to actually follow a trading strategy
– how to find your own trades without having to rely on anyone else
So I’ll try my best to release it by the end of this year.

About trading, I’ve learned long ago not to put too much weight on my performance, on how much I’ve made. What matters is execution. It’s about how flawless was my trading execution, how well I followed my strategy and trading plan for every single trades I took, regardless of outcomes.

A quite surprising turn of events happened this year.

Now it’s time to compare those results with what would have been my results if I had followed my strategy perfectly, the single exercise that made me profitable years ago.

It’s the first time in the last 6 years that my hypothetical results are that close to my real-time results.
It’s not perfect. I’ve still have a lot of work to do. But I’m getting there, step by step, years after years. Getting where? Getting to my ultimate goal of being able to take full advantage of the potential returns of my trading strategy.

What I’ve Learned This Year

1- I can handle stress

Although I kind of knew it, I have re-discovered that I can handle stress.
– Almost 100% of all my net worth is in my trading account
– This trading account is the account I’m using for the US Investing Championship. I can’t afford to take stupid risks.
– My one and only source of income so far is my trading
– I had to take care of my pregnant wife for the last 10 months, and now I have to take care of our new baby girl as first-time parents

I won’t say it’s been a breeze, but seeing that my trading performance hasn’t suffered much from all this gives me a nice boost in confidence. Almost no more problems anymore letting my winners run and cutting my losses short.

If I had to guess where that comes from, I’d say it’s a mix of experience I gained through past big losses, having “burned the boats to take the island”, and confidence I built by having traded the same trading strategy for many years, without any other source of income.

And of course it also stems from me having a well-defined complete trading strategy, and having fully accepted the fact that it’s not about finding a good trade, but about following that strategy.

2- Do the opposite of the majority

There are many ways to make money in the markets.
But you can’t have an edge if you do like the majority.
Don’t forget that most people read the same books, follow the same rules, feel the same emotions, and act the same way.

I think 99.99% of momentum/trend traders would get better returns if they just followed simple trailing stops (ATRs, parabolic SAR, percentages, points, moving average, …). And on top of increasing your returns, they remove the guesswork and reduce the impact of emotions.

Almost every single day, I see traders sharing their view on why they just took profits as they are seeing a reversal, or a stock is “extended”. They basically think they can see the future, or that their discretionary decisions are more effective.

After more than 10 years in this game, I’m pretty sure that 99.99% of traders (trading in the direction of the trend) would get better returns if they just followed a simple trailing stop rule. They sometimes get better returns on a couple of trades, but over a certain number of trades, their discretionary exits always underperform a simple trailing stop. Those guys often talk about “letting winners run”, yet they usually take a profit after a couple of hours/days. This is the need to be right, and the fear of losing part of their paper profits. Those same traders usually never share a losing trade, or when they do, it’s a trade they made money on of course. This basically shows insecurity, and that they are afraid of looking reality right in the eye, even though it’s the ONLY way to actually improve your trading.

If you are a trader following the trend, regardless of your time frame, I highly encourage to test different trailing stops and find out whether you’d have made more money using those instead of price targets or your magical “price action” interpretations.

If you’ve read my blog for a while, you’ll know that I focus all my efforts on the process, on following my strategy, regardless of money made and money lost. It’s my belief that unsuccessful traders are laser-focused on the outcome of a trade, on their PnL, on the money. And the handful of others focus on following a strategy, regardless of the outcome of a particular trade. They basically focus on the process.

After a rocky year last year, I worked on developing tools in order to try to curb my tendency to violate my rules, and especially to overtrade. You can read about what I did in my post about my 2018 trading results, and my post about the new features I added to my trading journal.

And so far this year, I’ve “only” made 8 mistakes. That’s 8 mistakes out of 75 trades which means I’m reliable about 89% of the time. And it’s WAY better than any other years so far. That also explains why my real results are not so far apart from my theoretical results, and tells me I’m on the right path.

Money is secondary. I live off trading, and I have fully accepted that what will decide whether I will make money in a particular year is not me trying to make money on every trade. It’s me following my strategy, it’s me focusing on trading well.

5- Traders trading for a living are a rare breed

When I started trading, my ultimate goal was to be able to trade for a living.
I’m blessed to have reached that goal a couple of years ago.
But after years in the business I’ve realized that I have yet to meet a trader who like me, lives exclusively from trading.

I’m not trying to boast. Au contraire, I think I may have been too close-minded in that area.
Am I trading to be able to tell the world that I’m making money only from trading, or am I trading as a mean to make money?

The truth is that I’ve had the honor to meet quite a few very successful traders, like Assad Tannous, or Moritz from tradeciety for instance, who, although they’re making tons of money trading, also have other streams of income. And it makes all the sense in the world.

At the end of the day, I make money in order to be able to take care of my family, and have more time and freedom. The goal is not just to trade for a living.

I’m not talking about the thrill of executing a trade or seeing the outcome of a trade, which I honestly don’t particularly find exciting anymore. And although I really like post-analysis and stats, I’m actually more talking about the freedom trading provides.

My income grows almost every single year. It only takes me about one to two hours a day. I can do it from virtually anywhere. And best of all, I can spend my remaining 22h how ever I want to. Which is especially important to me, now that I want to spend as much time as possible with my baby girl.
What other job could possibly give me this kind of freedom?