Making It Impossible NOT To Be Consistently Profitable 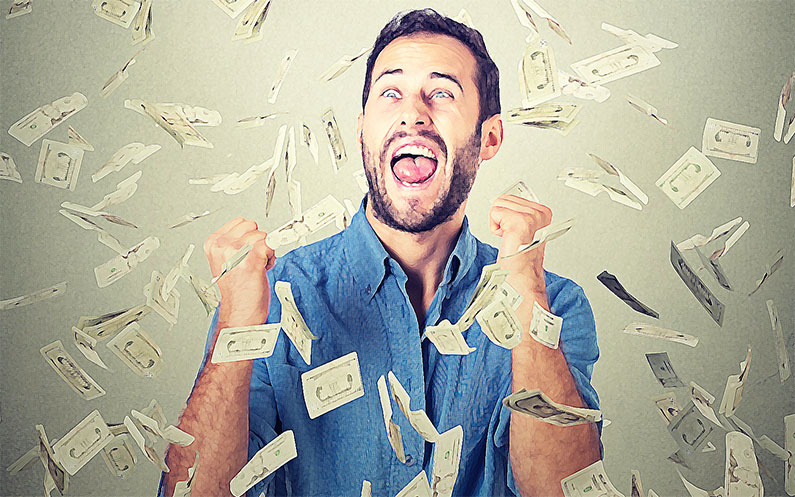 There is a simple mathematical fact in trading, which, although well-known, most traders immensely underestimate.
Understanding the implication of such a fact can be of tremendous help in turning you into a consistently profitable trader, and helping you stay in that small circle.

The 3 Numbers You Must Know About Your Trading

If you have been following me and my blog, you probably already know what those numbers are.
But they are so important, IMHO, that I’ll remind them to you anyway.

Those 3 variables will determine whether your trading strategy has a positive expectancy, in other words, whether you are actually making or losing money over time.

The “win rate” (a.k.a. “batting average”) is your percentage of winning trades over certain number of trades.
E.g.: If you had 80 winning trades over the last 200 trades, your win rate is 40%
Most trading strategy have a win rate between 40% and 60%.
Some strategies have a much higher win rate (which can go up to 80% for short periods of time), but they are usually very short-term (e.g.: scalping), the average loss is much bigger than the average profit, and the win rate fluctuates a lot, meaning that the expectancy of the system can quickly turn into a losing one since it relies so much on a high win rate.

Since most profitable trading strategies are right between 40% to 60% of the time, how do profitable traders actually make money in the markets?
They do so by focusing on the 2 other variables of the expectancy of a system: the average profit and the average loss.

So since the average loss can be kept in check, the only variable left is the average profit. Basically, this variable will determine how easy it will be for you to make money over time.

Making It Impossible NOT To Be Consistently Profitable 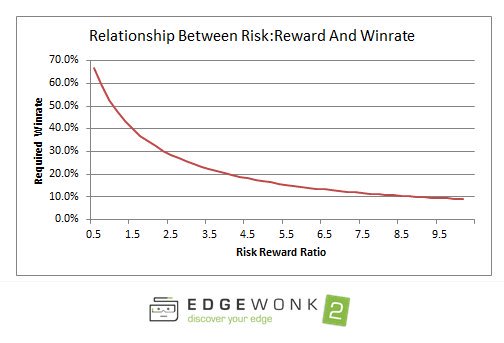 Courtesy of Edgewonk, here is a graph that shows the neutral expectancy curve, the threshold between profitable and unprofitable trading systems.
It basically shows that the higher your average profit is compared to your average loss, the easier it will be to make money.

As a reminder, the $ expectancy of your strategy (i.e. the amount you can expect to make per trade, over time, on average) can be calculated as follows:

For example, if your strategy produces an average profit that is 3 times bigger than the average loss, you only need to be right more than 25% of the time in order to generate profits consistently over a certain number of trades.

And even if your average profit is only twice as big as your average loss, you only have to be right more than 34% of the time in order to make money consistently in the markets. Yup, in that case, you can be wrong 65% of the time and still make money.

So the “magic” here, is that the bigger your average profit is compared to your average loss, the most difficult (if not downright impossible) it will be to NOT be consistently profitable in the markets.

Then Why So Few Traders Make Money Consistently?

The first reason why it is so hard, is because our very own human nature makes it extremely difficult to cut our losses short (keep our losses as small as possible), and let our winners run (stay in a trade as long as it goes up).
In fact, we are even “programmed” to do the opposite, to cut our winners short, and let our losers run…
To learn more about this natural tendency we have to do the exact opposite of what should be done, you can read this article on Loss Aversion.

Another reason why most traders fail despite having a positive expectancy strategy, is because they use position sizes that are too large, basically betting to big.
Indeed, even if your strategy wins 80% of the time, betting 100% of your capital on any trade will result in you losing all your money sooner or later. Betting your whole trading capital on any trade is just downright stupid, and you’d have better odds in a casino.

On top of that, if they can’t get into the habit of respecting risk with a small account, they won’t be able to respect risk with a bigger account anyway.

3- Aiming For The Bare Minimum

A common mistake among traders is to blindly follow what is taught in most trading books, which is to only aim for the ubiquitous 2:1 reward to risk ratio trades.
The problem with that is that although they will hit some 2:1 trades sometimes, on average, their average profit will be much less than twice their average loss. And of course, the smaller your average profit is compared to your average loss, the more difficult it will be to keep your $ expectancy positive over time.

You have a much better chance to have your average profit being twice as big as your average loss if you only aim at trades with a minimum reward to risk ratio of 3:1 or more.

Furthermore, those losing streaks usually happen when the market is changing and their strategy tends to be less effective, usually resulting in their average profit to decrease by itself.

And what happens when you increase your average loss and your average profit decreases: you basically f*ck up your expectancy and it can result in your very dear winning strategy to become a consistently losing one.
Meaning that by doing this dreadful mistake, they are making it much harder to make money at the very moment when things get tough, shooting themselves in the foot.

Nope. The thing to do when things get tough, is to tighten your stop losses. Because it’ll be easier to maintain that hopefully wide ratio your strategy has between your average profit and average loss.
And even if it means your win rate will suffer, never forget that being consistently wrong more than 65% of the time is actually difficult in the markets.

Win Rate and Win/Loss ratio are usually negatively correlated.
It is very likely that with the strategy you are using, just having larger price targets will cause your win rate to drop.
It is of course much easier to score 2R trades than 3R trades, let alone 10R trades or more.

Your job is to develop a strategy that not only has the potential to result in your average profit being much larger than your average loss, but also to keep a decent win rate ratio.

This is why I studied the biggest winners throughout history, the stocks that went up several folds within a relatively short period of time. I spent countless hours doing statistical analysis to uncover the few variables that really made a difference.
I then went on to analyze the precise moment to enter a trade, where the odds of me having a profit right from the start were the highest. This now allows me to use tight stop losses while making it easier to get 3R trades or more.

I developed my strategy so it has 4 pillars to make it robust:
1- good odds of getting in a big winner (large profit potential)
2- optimum buy point where the odds of me starting at a profit are the highest
3- tight stop losses to keep my average loss in check
4- proper rules and mindset to let my winners run


You now have the principles for developing a system that is robust. But of course, no one said it was going to be easy 🙂