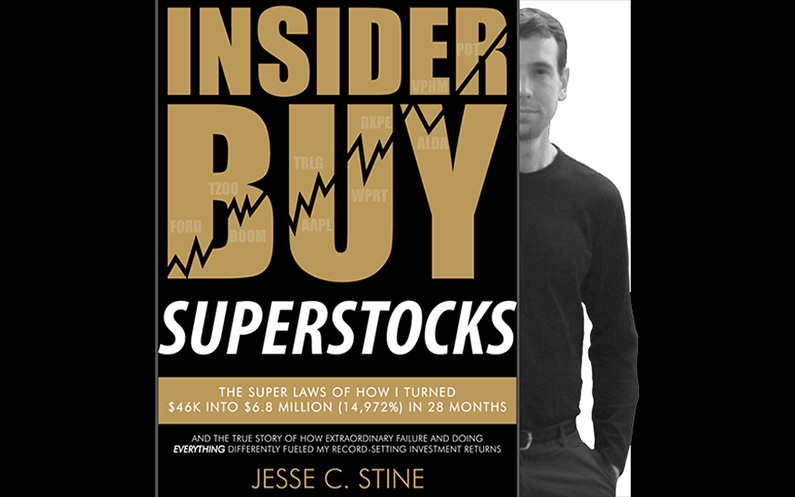 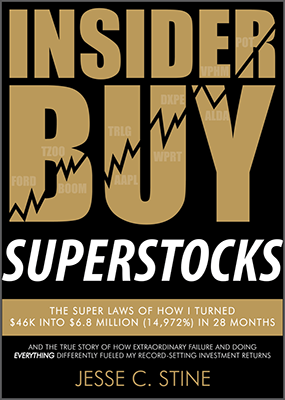 Jesse Stine is not the regular stock guru you see on the Internet selling services. Nope.

And he’s not a hedge fund manager trading other people’s money either. Nope. Jesse Stine is an independent stock trader, just like you and me, trading his own hard-earned money.

On top of becoming a self-made millionaire through his trading, Jesse also realized another dream of his a couple of years, which completely changed my life forever.
He wrote the book “Insider Buy Superstocks: The Super Laws of How I Turned $46K into $6.8 Million (14,972%) in 28 Months” in which he not only shares his life story, but also the trading strategy he used, as well as many invaluable lessons he learned through his 16 years of experience (at the time the book was publish, in 2013) as an independent trader.

8- Emotional Intelligence is of Utmost Importance in Trading

“It is oh-so-easy in hindsight to analyze a successful stock that you never owned. The ability to control your emotions is 90% of investing. Emotions never enter into the equation when you analyze stocks you never owned“

“Since the stock market is nothing more than global psychological warfare, and human emotion is reflected in the form of market prices, learning to master your emotions is absolutely essential to compete effectively“

If intelligence was the key to success in trading, there would be a lot more people making tones of money in the stock market. The truth is that emotional intelligence is much more important to succeed in the markets. You need to be able to master your emotions in order to follow your plan and not be tempted to buy or sell too early or too late. And being able to understand not only yourself, but also understand how other investors think, will give you an edge.

“Despite its appeal, very few traders achieve resounding success in this business. The boundless freedom the trader is faced with requires the utmost in self-discipline which very few people possess.“

“My approach is based on the principles of hard work, focus, and determination. It is not an approach that will hold your hand. It also requires the super human ability to delay gratification. Such method simply goes against our emotional tendencies. That is precisely why it works so well.“

If there is a Holly Grail in trading, or in any other endeavor, it is discipline. With discipline, you can achieve almost any goal. With discipline, you can study whatever you put your focus on, you can follow any trading strategy that has a positive expectancy and make money over time.
But unfortunately, discipline is a very rare commodity. In trading, unlike any other jobs, you are on your own. No one will be there to remind you or force you to do anything. No one will take your hand and make sure that you learn what needs to be learned, that you to respect your stop loss, that you cut your losses short and let your winners run.
The level of freedom we are faced with as traders is unlike anything most people have experienced in their lives. And if you lack self-discipline, it will be extremely difficult to succeed as a trader.

“Extreme account drawdowns could almost be considered as prerequisite for massive trading success.“

“Without hitting rock bottom, it can be difficult to cultivate the necessary passion within.“

Losses are just part of the trading game. Whether you are just starting, or you’ve been trading for 50 years and are the best trader in the world, you will suffer losses along the way.
But the way you see losses and how you react to them will determine whether you’ll succeed or fail in the long run. If you can see losses as opportunities to learn, you will not only be less negatively impacted by them, but you will also put yourself in a position to continuously improve your trading and be on your way to trading success.

“Unlike a casino, by being highly selective when picking stocks, you can stack the odds heavily in your favor thus vastly increasing your likelihood of success“

“Every time I was fortunate enough to experience a seven-figure portfolio advance, it was entirely because I sat and did nothing“

The market, the news, social media, your broker, your friends, your level 2 quotes, and even your recent losses will constantly try to trick you into trading as much as you can.
Successful trading though, is about being patient. It’s about waiting patiently for the trades that fit all the entry criteria of your strategy, and dismissing any other trades, even if you haven’t found any trade for a while, and even if you see some other stocks that do not match your criteria making big moves. And then, it’s about waiting some more for a sell signal, letting your trades run as long as possible, even when you are scared of losing your paper profits.

In order to be more patient when in a position, Jesse recommends to step away from the markets during market hours. Once in a position, just delegate the decision making to your stop loss. By watching every tick, your irrational mind will start rationalizing and try to find meaningless reasons to sell.

12- Use the Media instead of being controlled by it

“You must make a difficult choice: to be entertained by mass financial media or to ignore its lunacy to your advantage. The choice is yours.“

“The biggest gainers in the market will be the stocks that absolutely nobody is talking about in their initial stage. Always remember that journalists are anything but professional money makers. They just write for a living and are required to publish several articles a week whether the pieces are actionable or not.“

Media are money making businesses. If financial journalists actually knew what was going to happen, they’d be billionaires. They’re paid to write articles that appeal to the masses. Never forget that.
Instead of being the sucker, understand that they focus on what has already happened and convey the general social mood, what the majority thinks. And when there is a very strong consensus in the market, very often, moves in the opposite direction are about to happen.
Historically, market tops tend to occur at the point of maximum optimism, and market bottoms at maximum pessimism. This fact is very difficult to understand for new investors since they’ve always been taught to trust the media.
Jesse recommends to only read headlines to gauge the social mood, and when there’s a very strong consensus, be prepared for strong moves in the opposite direction.

“The very moment the media is cheering or crying the loudest is often when a powerful move in the OPPOSITE direction is about the occur. These misdirection campaigns are often funded by hedge funds, investment banks, or other institutions with millions at stake.“

13- Tune out the General Market Noise